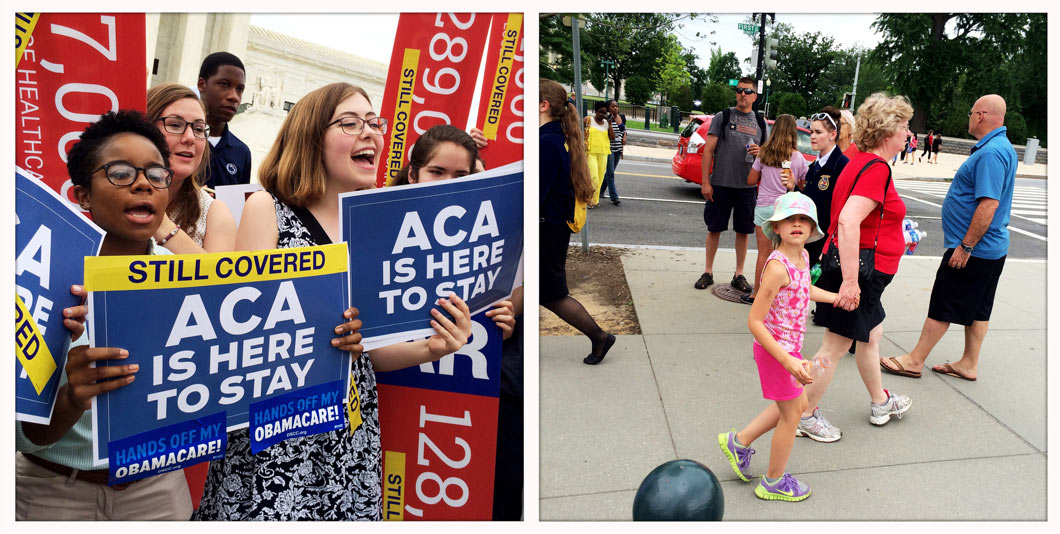 Students chanted and cheered as the Supreme Court ruled 6-3 to affirm an Internal Revenue Service ruling that subsidies should be available not only in states that have set up their own health insurance exchanges, but also in those where consumers rely on the federal government exchange.

As reported in The Washington Post  Chief Justice John G. Roberts Jr. said that while the law’s wording was problematic, Congress’s intent was clear.

“Congress passed the Affordable Care Act to improve health insurance markets, not to destroy them. If at all possible we must interpret the Act in a way that is consistent with the former, and avoids the latter,” Roberts wrote. Thumbs up for the ruling.

Supreme Court Justice Antonin Scalia said Roberts, who also wrote the decision in 2012 that saved the Affordable Care Act from that challenge, has performed “somersaults of statutory interpretation” to preserve the act: “We should start calling this law SCOTUScare.”

President Obama in his statement said, “After nearly a century of talk, decades of trying, a year of bipartisan debate, we finally declared that in America, health-care is not a privilege for a few but a right for all… “The Affordable Care Act is here to stay.” Fox News’ Shannon Bream works through what she will say before going on air, as a lone protestor watches students celebrate the court ruling in favor of Obamacare.

For the students holding the rally, this means they are able to either stay on their parent’s plan until they are 26 or choose from a variety of other options including Medicaid, if they qualify.  But they have to have some form of health insurance or pay a penalty.